The 11th edition of the World Cup

The 2015 Cricket World Cup will be jointly hosted by Australia and New Zealand. The location of the games will be evenly split, with the day-night final match to be held at the Melbourne Cricket Ground on March 29.

Sri Lanka will play 5 ODIs in India after West Indies decided to pull out of the ongoing tour of India. India currently sits in third position behind South Africa and Australia, and leads fourth-ranked Sri Lanka by two ratings points.

Virat Kohli struck an unbeaten 139 to guide India to a three-wicket victory over Sri Lanka in the fifth and final match of the series, earning the World Champions the top rank on the ICC ODI Team Rankings. India had started the series at the third position on 113 ratings points and has finished on 117 ratings points. Sri Lanka have retained their fourth position but slipped to 108 ratings.
Reported Earlier: India’s captain for the first three ODIs will be Virat Kohli, who will be aiming to regain the number-one ranking in the series. The last time Sri Lanka toured India for a bilateral series was in 2009 and the last time Sri Lanka played India in India was in the 2011 World Cup final, which India won comfortably.

‎Sri Lanka finally broke their World T20 jinx to finish champions, chasing down India's modest score of 130 for 4. Sri Lanka were beaten in the 2007 and 2011 World Cup finals and the 2009 and 2012 World T20 finals. Despite a belligerent 77 by Virat Kohli, India couldn't accelerate the score in the final overs due to Yuvraj Singh's excruciatingly slow innings of 11 off 21. The last four overs were a calamity for India as Kohli faced just eight deliveries and India scored only 19 runs. Skipper Mahendra Singh Dhoni came in with only 11 deliveries left and found it difficult to accelerate the pace of scoring.

Man of the Match Kumar Sangakkara become the fourth player after Sachin Tendulkar, Ricky Ponting and Jacques Kallis to score 25,000 international runs during the 35-ball 52 - his last T20. Virat Kohli won the World Twenty20 player of the tournament award for his 319 runs - including innings of 36 not out against Pakistan, 54 against the West Indies, 57 not out against Bangladesh, 23 against Australia and a match-winning 72 not out against South Africa in the semi-final.

Reported Earlier: Covers on at Mirpur stadium, and the final of the ICC World T20 between India and Sri Lanka is likely to be delayed because of steady rainfall.

India on the cusp of record treble

‎World ODI Champions India is looking to seal an unprecedented limited-overs treble when they meet Sri Lanka in Sunday's World Twenty20 final. After winning the 2011 50-over World Cup final in Mumbai - when Sachin Tendulkar was still part of the Indian team - MS Dhoni led India to Champions Trophy glory in England two years later. They now stand just one match away from becoming the first country to hold three major titles at the same time. Meanwhile, this will be the last game in the shortest format for Jayawardene and Kumar Sangakkara.

Kohli takes India into the Final

Virat Kohli scored 72 from 44 balls to help India chase down the 172 South Africa put on board after winning the toss and batting first.

Reported earlier: South Africa won the toss and elected to bat first against India. Faf du Plessis comes in for Farhaan Behardien for South Africa while Team India remain unchanged from their last match. Shikhar Dhawan and Mohammed Shami remain out of playing XI as Ajinkya Rahane and Mohit Sharma stays in the team. The first semi-final was disrupted due to rain and hailstorm, which resulted in a 27-run victory by D/L method for Sri Lanka, and the weather forecast for tonight predicts heavy rain once again.

In Dhaka, Sri Lanka made 160 for six, and the rain and hail which stopped play when West Indies were on 80/4 from 13.5 overs made sure the Lankans progressed to Sunday's final with a 27-run Duckworth-Lewis victory. The win was sweet revenge for Sri Lanka who lost the 2012 final to the West Indies in Colombo. Sri Lanka had raced to 41 in the fourth over thanks to Dilshan and Kusal Perera, before they lost three wickets in the space of 15 balls. Jayawardene was run out without facing a single ball. Dilshan made a run-a-ball 39 before he ran himself out.

Reported earlier: Lasith Malinga, who skippered the team in Sri Lanka's last group match against New Zealand, will captain the team in the absence of their first-choice skipper Dinesh Chandima. All eyes will be on Rangana Herath, whose scintillating figures of 5/3 against New Zealand in their final group stage match propelled the islanders into the semis.

West Indies will host an ODI tri-series against India and Sri Lanka in Jamaica and Trinidad from June 28 to July 11, 2013. The tri-series comprises seven matches, with each team playing the other twice before the finals. 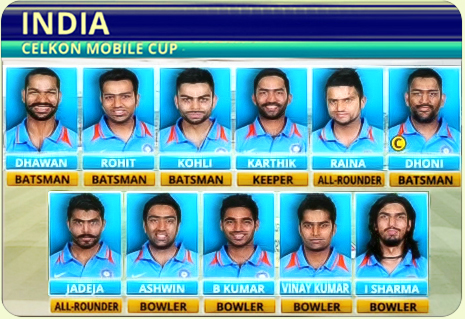 Reported earlier: Sri Lanka and India are set to face each other in a repeat of the Champions Trophy semi-final. India booked a date with Sri Lanka in the finals on Thursday, after topping the standings with 10 points while Sri Lanka and West Indies both finished with nine points. Sri Lanka moved to the second spot with a lead in the overall net run rate. Today's match will be Mahela Jayawardene's 400th ODI. He is only the third cricketer to play 400 ODIs after Sachin Tendulkar and Sanath Jayasuriya. For India, regular captain Mahendra Singh Dhoni will lead the team. Murali Vijay will make way for the senior player. Also, Vinay Kumar is in for Umesh Yadav.

I think I am blessed with a bit of good cricketing sense. I knew I could get 15 runs off the last over, I'm happy that it worked.

The last edition of the tournament!

India beat Sri Lanka, will meet England in the final

England romped into the Champions Trophy final with a seven-wicket victory over a South Africa side who once again choked in a major semi-final. The Proteas collapsed to 80/8 before a 95-run stand between David Miller (56*) and Rory Kleinveldt (43) hauled them to 175. Jonathan Trott's 82 not out saw England, who have never won a global 50-over competition, across the winning line in the 38th over.

Free Windows 8.1 App: The latest Cricket news from your favorite websites. You can also add new RSS feeds based on your interests to see them all in one place. Works on any device that supports Win 8.